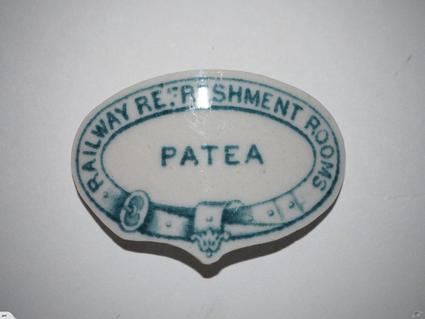 ​For something that has been pushed aside in favour of other means of transport…the Railway was a hard fought for advancement in the days when travel slowed down the progress of our ambitious new nation. As early as 1864 the idea of a Railway through Taranaki was raised, but no work on this started until  1872, when the first survey’s were made through the bush from NP to Waitara. Sections of Rail heading south, were completed over the next few years, linking up the new towns across Taranaki.

The anticipation of the Railway coming to Patea stirred up optimistic enterprise, in the case of business men like Felix McCarthy  who built the Railway Hotel more than 2 years before the Railway came to town.  The two storey Railway Boarding House can be seen behind the Railway Station to the left. It was built in 1899, to replace the Railway Hotel built by Felix McCarthy in 1881.(The Railway Hotel was relocated to Honeyfields 'Park Farm' at Whenuakura in the mid 1890's) Other infrastructure was built in preparation…interestingly the contract for the 3 major things, the Railway Wharf, the bridges & the Station was let to a Dunedin company, Proctor & Downes, who, in the beginning, used unemployed men from Wellington, while local men were in the same situation in the slump of the early 1880’s, but after much protest, local unemployed men were used, & the contract was completed in good time.  Same issues, different times.

William King Howitt early Patea settler (son of William owner of Bakery at top of Bedford St where whale bone sculpture is now), in his memoirs, A Pioneer Looks Back’ writes about one ‘bad day at work’ for the Railway men: ‘One of my earliest memories was when the railway line was being made between Waverley & Patea. Where the high cliff on the eastern side of the Patea River had to be blasted away, so that the line could have a straight run into Patea Station, an old Pakeha Cemetery at the top of the cliff (on the Haere Hau Pa site) unknown to most of the new settlers was destroyed, and the old coffins fell into debris and were afterwards decently buried.’

Interestingly the Mayor of Patea – James Milroy, resigned less than 2 weeks before the big celebration of the Railway opening. RA Adams became the towns 3rd Mayor.  The opening day & public holiday that had been declared, was postponed. Then finally on 28 August 1883 the 17 mile section from Waverley to Manutahi was opened with great fan fare at the new Patea Railway Station. The final gap of 9 mile & 7 chain between Manutahi & Hawera was completed 2 years later on 23 March 1885. The tricky area from Foxton to Wellington was completed at the end of 1885. In 1884 Patea was declared a ‘Port of entry’ and the Customs House was built.  Rail & the Port were a hive of activity. The Patea Station‘ Refreshment Rooms’  number was 14, this appeared on china & other chattels . Liquor was sold there, & in 1887 at least 3 rooms were rented out for paying guests.

The trains were a mixture of goods & passenger carriages, & it took around 3 ½ hours for a 50mile journey. And there was a mail train between NP & Wellington which had no small stops so speed up the time. A mixed carriage trains from Wanganui to NP took 8 hours – until 1928 when a fast passenger only service was introduced, known as the ‘Flyer’ , covering the same distance in 4 ¾ hours.  In 1939 the new ‘standard’ Railcars began to be seen on the rails, they were to remain until 1972, when they were replaced by the new express railcar service of the ‘Blue Streak’.  There were de railments & disasters over the years. In January 1922, unseasonal heavy rain in the back county causing the river to flood & wash out the ail bridge at Whenuakura. The 4.40am goods train from Wanganui had a miraculous escape when they came round the corner toward the bridge to find most of it gone. Luckily in the summer’s morning light they could see enough to stop in time.
​
A Red letter day for Patea was the Day the Queen came to town on a whistle stop Train tour on Friday 8 January 1954. The royal visitors were greeted by a 99ft by 6ft stand of red, white and blue Hydrangeas, spelling out ‘Elizabeth -Welcome to Patea – Philip’. At a short ceremony the Mayor Mr Guy Corbett & his wife Freda (nee Boagey) were presented to the Queen & Duke. Local Returned Servicemen also got to have a quick chat with the Royal couple. A bouquet of Roses (arranged by Mrs Jean Fleet) was presented to the Queen by Miss Pamela Maule. The roses were from Dr & Mrs Graves garden at Waverley. All too soon the Royal visit was ended. After a stop of 20 minutes, the Royal visitors boarded the train & left for Hawera, where royal-themed hydrangea displays were again prominent and even utilised to assist in crowd control. It must have been a good season for Hydrangeas in 1954.
The Old Patea Station was replaced with a new, smaller, modern version in 1960, about the same time diesel came in & steam went out…. no Refreshment Rooms in this much smaller building!
Patea Station closed  31 May 1976  for passengers  & 22 September 1986  for goods