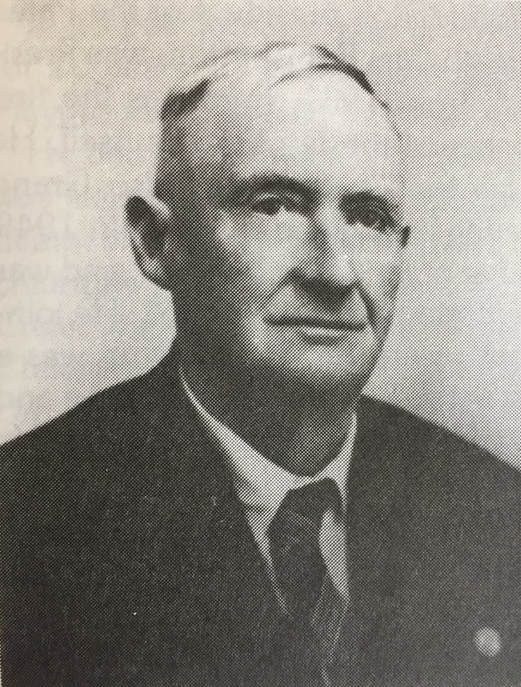 Mr Fred Ramsbottom: (b 1877 - d 1952)
Mr Fred Ramsbottom was the longest serving Borough Council member to date giving 34½ years of his 51 in Patea to Council service and he was the mayor with the greatest length of service, 15 years.
He was first elected to the Council in 1909 and served till 1929 except for two two-year terms. In May, 1929, he became Mayor when Mr Finlayson decided not to stand again and continued
for four terms of office. In 1935 the council elections were changed from two to three year terms and he was mayor till 1938 when Mr Hemingway took over for one term.
Mr Ramsbottom was elected a council-lor but had leave of absence till November, 1938, and then continued service till he came back as Mayor in 1941 for a further 6½ years. (In 1947 the election date was moved from May to November which gave him an extra six months). He then retired from Council service all together.
Mr Ramsbottom officiated at the unveiling of "Turi's Canoe" in 1933 and presided at the Silver Jubilee functions in 1931.
As a tribute to his long service, in November 1948, he was asked to name a new street and chose Manchester Street after his birth place. After his death the Ramsbottom family donated the mayoral chain to the Borough and it was presented at a ceremony in April, 1956.
Fred was born in Salford, Manchester in April, 1877. He worked in the cotton industry for four years and then went into the butchery trade at Blackpool when he was 17.  In 1901 he emigrated to New Zealand with his brother and a companion.
They started off road-making at Wanganui but within a year Fred moved
to Patea in response to an advertisement to join W. Rossiter‘s butchery business.
He married Clara Sarah Hannah Ward, daughter of a local farmer in 1903 and lived behind the shop. For a while he was running the butcher's shop in Kakaramea, and then back in Patea, resided at 3 Richmond Street. He took over the butchery in 1908 and later continued in this business until his retirement in 1948. This business is now Hurley's Butchery, run by Grant Hurley in the same building.
Fred will be remembered by many for his great interest and activity in local affairs. He was awarded the Coronation Medal in 1937. He was a director of the Kakaramea Dairy Company for 22 years and a member of the Patea Harbour Board. He was the foundation president of the Patea Scout movement and its Patron till his death. (Mrs Ramsbottom  was President of the local Girl Guides for many years from 1931).
He was the first president of the Patea Fire Board and a member of the Fire Brigade itself. He was secretary of the local  Druids‘  Lodge for 23 years and also a Grand Master of the Lodge and went to their meeting in England in 1928 and, in 1949, attended an International Grand Lodge of Druids in Sweden and he was awarded the Druids‘ Abel Award for meritorious service in 1951.
He joined Freemasons in 1911. During both World Wars Mr Ramsbottom was a keen worker in the Patriotic Society and in World War II he and his wife personally sent parcels to every Patea serviceman overseas and he organised farewell and welcome home functions for them.
He was also a member of the Municipal Band for 25 years, of the Patea Rifle Volunteers and the Anglican Vestry and their choir.
On the sporting side he was a member of Patea Bowling Club and Patron of the Women’s Bowling Club after he and Mrs Ramsbottom donated the land for the green and he was also President of the Patea Boxing Association. Fred and Clara are buried at the Patea Cemetery. Clara died in April 1952, and Fred in November the same year at the age of 75.