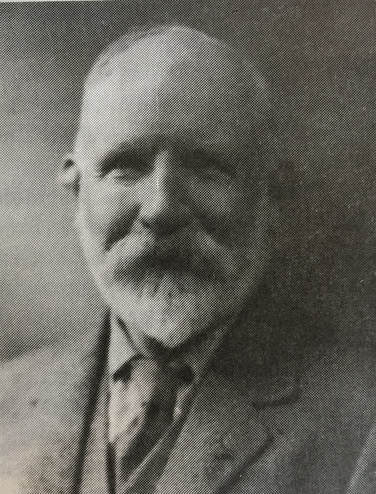 Mr George Williams: (b 1858- d 1945)
Mr George Williams came to the mayoralty by unanimous election of the council on the resignation of H. O. Clarke in December, 1905.
Williams had already been contin-uously on the council for 18 years. His public popularity was endorsed in May, 1906, when he was elected by 179 votes to Mr Rossiter’s 98 and confirmed in 1907 when he held his position this time against former Mayor H. O. Clarke by 156 to 123 votes.
He retired from the council at the end of this term after 22 years, but returned for a further four years in 1919-22
George was born in N.Z. in 1858 and was the first Mayor to have been born in N.Z.  His father was William Williams born 1827, d 14 March 1902 aged 75yr. buried at Patea, plot 5049. William William's came to NZ with the 58th Reg, then became a Policeman in Auckland. He married  Sophia Cobine, they divorced, and she died of alcoholism related illness. They had 6 children:
Mary Anne – died at birth,
George – b 1858 married Elizabeth Robertson & moved to Patea in 1881,
John – b 1860
Mary Ann – b 1862 …married ‘Peter the Greek', Mangos & had 13 children,
William Nicholas – b 1864,
Joseph Henry Shade Kinslie – b 1867, d 1871 (may not be William William’s son).
William Williams was a carpenter and the family was at Otahuhu when George was born. George was educated in Auckland and went to try his luck on the West Coast Goldfields. In 1871 he came up to Whanganui and was employed with T. W. Fisher from whom he learnt a lot about horses.
In 1881 George moved to Patea and set up in a general carriers and coal-merchant’s business. In 1883 he married Elizabeth Robertson of Dunedin and they lived at 46 Norfolk St. George and Elizabeth had 5 children, 3 daughters and 2 sons. Their son James William (Bill) Williams went to WWI, and came back with an English bride – Winifred Alice Ball, she died at age 32 yrs, in childbirth in 1921 and is buried at the Patea cemetery, plot 5080, 2 rows away from her father inlaw George Williams. The child died too. Bill Williams second marriage was to Florence Crawford, daughter of Thomas Addison and Annie Moroney Crawford.
After a while George extended to a passenger business and his cab met all the  trains  at  Patea  Station.   In 1908 he had thirteen horses, two brakes, and his cab. Other interests included the Patea Jockey Club which he helped to organise and the Ancient Order of Foresters of which he was treasurer of the local court and at one time Chief Ranger.
Just before retiring from the Borough Council, he was its representative on the Patea Technical School Committee in 1908. He died at the age of 86 in 1945 and is buried at Patea Cemetery