Burials started at The Patea Cemetery on Scotland Street around 1869. But before that a cemetery was across the River at Wai o turi and another on what is now the Patea Golf Links and another 11 European Soldiers buried at the beach, near the boat ramp. 'Mr Harry Locker’s memoirs “Pioneer days in Patea”, reprinted from the Patea and Waverley press in 1929, records; “Speaking of cemetery’s, it is interesting to note that the first cemetery in the town was situated at the top of the cliff above the present railway viaduct. Here quite a number of early settlers were buried here (10 it is thought), and here, by the way, was situated General Cameron’s first camp in the district. Eventually it was found easier to land on the town side of the river, and the camp was shifted accordingly" In his book “ A Pioneer Looks Back Again” Mr W.K. Howitt says of this cemetery:- “One of my early memories was when the railway line was being made between Waverley and Patea. Where the high cliff on the eastern side of the Patea River had to be blasted away, so that the line could have a straight run into the Patea Station, an old Pakeha cemetery at the top of the cliff, unknown to most of the new settlers, was destroyed and the old coffins fell into the debris and were afterwards decently buried.”

Sometime before 1865 a new cemetery was formed on the Heads Road, in what is now the Patea Golf Course (Harbour Board Reserve Land) adjoining the Domain. It wasn't used for long and all record of who & how many people were buried there has long since been lost. The Battle of Te Ngaio was on 15 March of 1865, and this heralded the first burial at the Scotland Street Cemetery of a soldier killed in this battle- Private James Nixon of the 57th Reg. The area of Te Ngaio runs from the cemetery, on towards Kakaramea. It is unknown where the Maori killed in that battle are buried. Tu-Patea, of Taumaha, describing this engagement of Te Ngaio, which was fought over his own tribal lands, said:--
“I followed my elders into action, armed with my tomahawk. Over two hundred of our people came out to fight in the open. There were five women among them, not armed, but urging the warriors on. One of them, Tutaki's wife, was killed. The principal chiefs were Patohe, my father Hau-Matao, Te Waka-taparuru Paraone Tutere, and Te Mahuki. Our prophet was the old man Huriwaka, from Otoia, on the Patea. His god was Rura. Huriwaka, before the fight began that morning, prophesied saying, ‘To-day's battle will be good; it will be a favourable fight for us.’ But we were beaten, and eighty of our people fell on the field of Te Ngaio.”

The second burial on the hill at Patea Cemetery was in 1869 - Margaret Sergeant. Another very early burial is Charles Broughton. He was killed on the 1st October 1865 at Otoia and was buried by the Patea River in the area the boat ramp is now located, where his body was found. He was re-interred in the Patea Cemetery by the Patea Borough Council in 1937.

A mistake was made in the recording of the first burial at Patea Cemetery. Private Nixon was confused with Private Bates. Archaeologist & Heritage Taranaki President Ivan Bruce, has done extensive research on the 8 burial plots on the top of the hill at Patea Cemetery on Scotland Street. He found newspaper articles stating that Private Robert Bates wasn't killed at Te Ngaio, & therefore "The possibility exists that Private James Nixon (who was killed at Te Ngaio) and Private Bates have been confused and it was indeed Nixon that was reburied at Lot 17 of the Patea Cemetery, he was as far as I can establish the only European Soldier killed at Te Ngaio".

After the Storm in 2012 the Pine Plantation on top of the hill above the Scotland Street Cemetery was removed, & the 3 remaining Headstones were able to be seen again.

Old graves on top of Hill:
Plot 13: Dr Archer Charles Croft, died 26/4/1886, aged 61. . It is said he was descended from an English aristocrat, & had arrived from England in 1852, settling in Christchurch. He opened a Brewery there in 1854. After spending time on the Otago & Thames goldfields, he arrived in Patea in 1874, residing on the corner of Dorset & Leicester Streets. His wife had died giving birth to a stillborn son, and his daughter died as she was about to join him in Patea. Dr Croft was described as a big, robust man, actively interested in horse racing & cricket. His Medical Practice was 'at all times subservient to his enjoyment of life'. Mounted on his white charger and immaculately dressed, he was a familiar figure traversing the countryside between Hawera and Waverley. He was active on community boards, being a founder member in 1875 and president in 1878 of the Patea Library & Institute, and Chariman of the Foundation Stone Committee for the Patea Breakwater in 1878. He was steward to the Patea Jockey Club, and Surgeon to the Patea Light Horse.
Plot 14: Margaret Easton Sergeant, died 31/3/1869 aged 35. Margaret was the wife of Irish Military man, William Sergeant. They had 6 children, when she died in childbirth with the 7th child in 1869. They had been operating a Store on the beach from 1865, for other Soldiers in the area. This headstone was erected by her descendants sometime around 1916. Margaret's daughter Sarah married Harry Locker. The headstone on top of the hill of Margaret Sergeant was erected about 40 years after her death (in 1916) it has commanding views over the cemetery, & the sea in the distance. Margaret & William's daughter Sarah married prominent Patea Businessman Harry Locker.
Plot 15: Dr James Benjamin Fraser Suther, died 10/3/1870, aged 29 (died from septic cut received during a surgery) Son of Rev TG Suther, Bishop of Aberdeen
Plot 16: Glanville Warren Holland, died 10/10/1870, aged 45, accident at Kakaramea Flax Mill
Plot 17: Robert Bates, 57th Regiment, died at Battle of Te Ngaio 15/3/1865. (Cemetery records have Bates buried here, but Newspaper reports at the time say he lived. Archaeologist Ivan Bruce, has done extensive research on the 8 burial plots on the top of the hill and he believe's this is Private James Nixon also of the 57th Regiment, he was killed in the battle, buried at Kakaramea Redoubt,  but we think he was re-interred in Plot 17 soon after)
Plot 18: Sergeant Boylan, died September 1869, suicide. Sergeant Boylan shot himself while under arrest at Patea and died from the self-inflicted wounds. He belonged to the light Company 65th.
Also Two infants.  Possibly the graves are located in the vacant area between the gravestones of Doctor Suther and Glanville Holland.
Mary Gahan 13/5/1876, aged 2 weeks daughter of a Mary and James Gahan
David George Bourke   1/1/1878, aged 4 months
The RSA Servicemen's Cemetery was started in 1948.
​
Mortuary Chapel:
Patea Mail 2 June 1881 calls for tenders for the construction of a Mortuary Chapel
Patea Mail 22 June 1881, Mr Laird of Wanganui is the builder of the first Patea Cemetery Mortuary Chapel. In 1896 the Chapel was rebuilt, using materials from the origional 1881 buildng
The Mortuary Chapel was first constructed in 1881, then rebuilt using a lot of original timber & features in 1896. It was moved to its new position at the Cemetery in 2013, with the Mountain behind it, & Norfolk Pines at a safer distance. It has recently been restored by the South Taranaki District Council. David Bruce was instrumental in its restoration, & told me there was originally a zinc bench inside where coffins would sit, awaiting burial. Grave diggers equipment was also stored in here in earlier times. 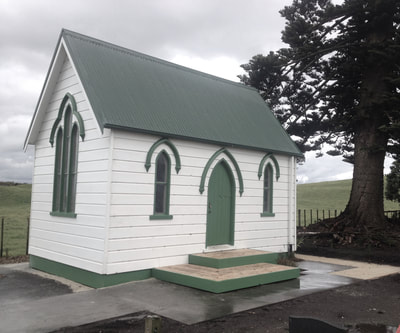