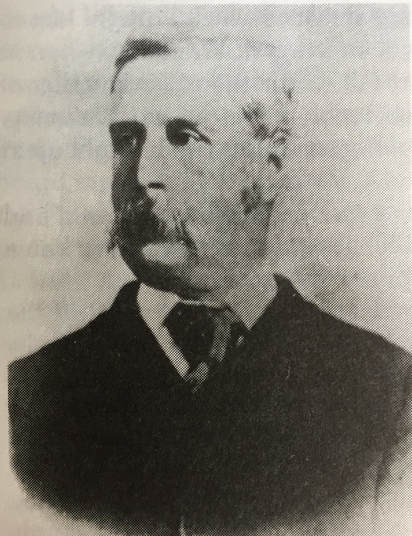 Mr Herbert Onslow Clarke: (b 1847- d 1922)
Mr Herbert Onslow Clarke followed James McKenna as mayor in 1898. He had arrived in Patea the previous year when he was appointed Town Clerk in October 1896 -during McKenna’s mayoralty and he resigned this post in 1897 and was elected mayor in December of that year. (The mayoralty had been decided every November or December since inauguration of the council but with the new century the election date was changed to a biennial one in May) Clarke was returned for several terms of office and continued until 4 Decémber, 1905, when he resigned over an issue on his appointment to the Hospital and Charitable Aid Board which he took as a vote of no confidence in him, and George Williams was unanimously elected by the council to fill the remainder of the term of office till May.
Clarke returned to the council as councillor at a by-election in June, 1906, and although he contested the Mayoralty in 1907, failed to oust George Williams, but continued on the council till February, 1914, when he resigned for health reasons, thus completing 17 years of council service.
His association with the council was longer however with his first appointment as Town Clerk and on his resignation from council he was appointed Borough Solicitor till 1921.
Mr Clarke followed his father William into the profession of a solicitor: He had been born in London where he was educated privately and then at King's College, London, whence he qualified as solicitor and practiced for 15 years in London.
In 1888 he came to New Zealand and settled in Akaroa, was admitted as a solicitor by the Supreme Court of New Zealand and set up practice in partner-ship with Mr Henning. Straight away he was elected mayor of Akaroa and held this position for the four years he lived, there.
For some time he was chairman of the Cemetery Board and chairman of the Hospital and Charitable Aid Board and he was on this board again from 1909. For a long time he was secretary of the Chamber of Commerce and for some years treasurer of the Patea Racing Club from 1899 and its president in 1906. As one of the shareholders of the Western Packing and Canning Co. He was the one to move the winding up and selling of the property in 1902.
Herbert  Clarke therefore played a great part in Patea affairs for a quarter of a century. He died here in 1922 aged 76 years and is buried in the Patea Cemetery beside his wife Lucy Catherine Clarke. They had one son in 1891 – Reginald Herbert Clarke, who was working at the Patea Freezing Works in 1918, and died in Whanganui in 1941.