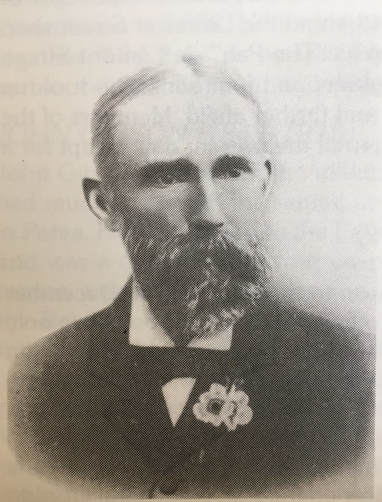 Mr William Cowern: (b 1847- d 1926)
In November 1890 Mr William Cowern was elected to the mayoralty and was twice re-elected. He had not previously been on the Borough Council but had been in Patea for many years and would have been one of the best known people as local auctioneer, land agent, and Government agent, being agent and sub-treasurer in Patea for Taranaki Province.

William’s brother Frederick came out to New Zealand too and he and his wife Ann Jane Corlett spent some time in Patea and had 8 children, 5 sons and 3 daughters.

In 1874 William settled in Patea with his young family, and started business as an auctioneer and was also a land agent and a commission agent. As commission agent he collected rates for No. 24 Hawera area and No. 26 Patea West Road district. In 1875 he owned a lot of land himself and by 1878 he obtained the freehold of his sections, and later when standing for Parliament one of his planks was the rights to acquire the freehold of land and he also advocated the opening up of roads into the interior for the benefit of the back-blocks settlers. He stood for Parliament several times but was  never  elected, his  ideas  being considered too progressive at the time to win favour from a largely farming community in spite of his activities for the opening up of land.

While mayor in 1891 he went to Wellington as a delegate on this issue. He was a personal friend of  Fox,  Vogel, Ballance and Seddon and they stayed with him if they were in the district. In 1891 while campaigning for a seat he spoke in favour of Ballance's Land and Income Tax, Co-operative systems and a scheme of endowing councils with land to provide revenue, government control of railway management, and opening up of roads.   In his earlier years in Patea he had been secretary-treasurer of Patea Education Board for the four years of its existence (1874-78), was secretary of the Patea Harbour Board for one year, 1877-8, and he was a prominent promoter of the meat works. He also always had a great interest in military matters and was Captain of the Patea Light Horse in the 1870s.

It was said of him that over half a million acres of land passed through his hands and he negotiated some of the largest land deals taking place in the North Island and he was considered by some to have done more to promote prosperity in the district than any other man.   In later years William and Mary Cowern shifted to Hawera to be more in the centre of things. They finally lived in Devonport, Auckland, where Mary died at age 65 on 9 December 1919 and William died at the age of 78 in 1926 at the home of one of his daughters in Devonport.