The very unique Alton Hotel Soldiers Penny Board has 90 pennies on it and was a historical feature in the Hotel until it closed in 2011. For many years in was part of the top of the Bar, then it was cut out of the Bar and hung on the wall. Its origins date back over a century, when local men were heading off to WWI. Each Penny had a local man’s initial stamped into it as he had his last pint there, and went off to War, many are worn down with years of hands touching them, remembering these soldiers. A cross is cut into the wood for some of those killed in action. The 20 penny’s at the bottom are from WWI, and the remainder are WWII..

The Penny Board is now in the Alton Coronation Hall. New information about how the Alton Penny Board began has come to light, after Helen Sinclair saw it in the ‘Bringing it Home’ Exhibition at Puke Ariki in 2014. Helen told me how the first Four WWI pennies came to be put on the Alton Bar…here’s the story -  her Dad was David Crompton 11/416 from Hurleyville, son of early settlers James and Hannah Crompton. He went to WWI right at the very start of it with his two brothers James 15/31 and Fred 11/580 and their friend Florrie McCarthy 11/502 (Florrie later married their sister Alice Elizabeth). They all rode their horses from Hurleyville (10km inland from Alton) to the Ball Road Railway Station. On their way past the Alton pub they stopped for a drink and put a penny each on the bar, they were stamped with their initials, and off they went to war.
FC is the 2nd penny up in the bottom righthand corner, and JC is 2nd from right on bottom row. FM and DC must have rubbed off as the pennies next to it are unreadable
The four of them were in the Wellington Mounted Rifles, so would have taken their horses off to War. They all left New Zealand on 16 October 1914, in the first ship load of soldiers to leave for the War. There were 8,500 NZ Expeditionary Force Soldiers on these first fleet of 10 ships, and 4000 horses.
Fred was too young back then, but lied about his age to go, he also went to WWII and by then was too old, so lied again and lowered it. He is the only man to have two pennies on the board. Their father James Crompton (married Hannah Quinn) was a labourer and road worker in the early days and helped cut Ball Road through to Hurleyville, Crompton Road is named after him. 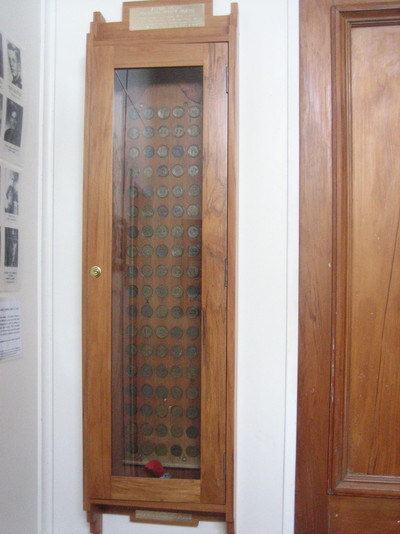 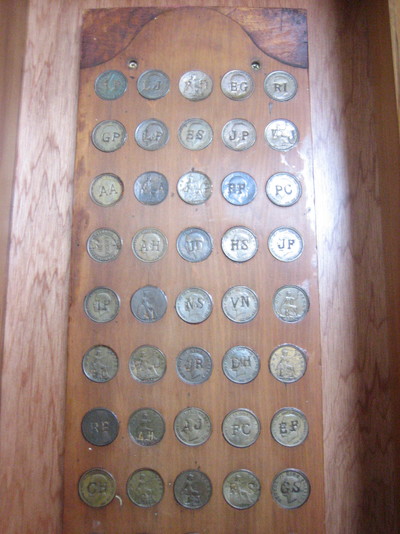 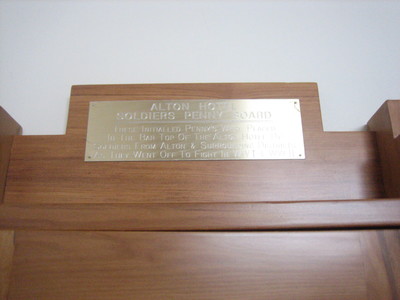 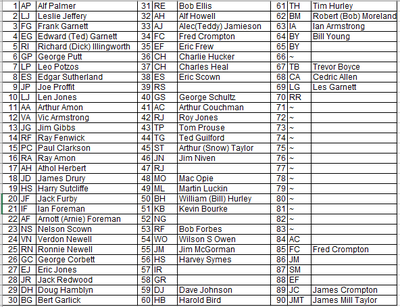