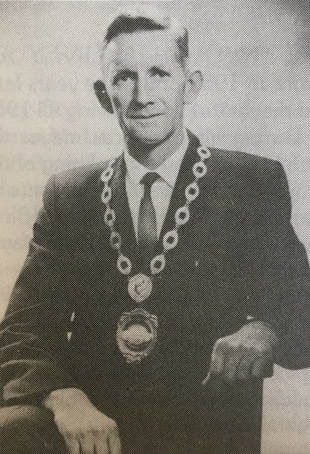 Mr  Allan Henry Prince: (b 1914 – d 1998)
Mr Allan Prince came on to the Borough Council in 1959 and three years later was elected mayor and again in 1965 serving till 1968 when he retired from Council service.   During his period as mayor the amalgamation of the Hospital Board with Hawera and the splitting of the Patea County at Whenuakura were controversial issues. Other events included the visit of Governor General and Lady Ferguson in 1966 and the first pensioner flats were built and opened, and named after the first mayor of Patea - Sherwood.

Mr Prince was born in Wanganui on 30 August 1914. His grandfather, of Cornish descent, settled in Westmere in the 1860s and his father was born and lived in Westmere.  Allan was educated at Brunswick School till 13 years old when he took up farming work and contracting work, later working for Mr Chesswas, a building contractor in Wanganui, where he learnt the building trade. Later he took up various farming and building jobs and he moved up to Waverley where he married Miss Phyllis Sinclair in 1939. Their first home was the double unit house on the corner of Essex and Kent Street.  In 1940 when he was in the sawmilling trade with T.W Wall he was “man-powered“ in 1943 to the Patea Freezing Works for war service as a wool classer for the duration of the war. After this he was living in Patea and set up his own building business in 1947 in which he worked mainly on new housing, renovations and maintenance work for the Wanganui Education Board. They then bought a house at 158 Egmont Street, which they sold to the Rio family, unfortunately it later on burnt down in a house fire. From Egmont Street they bought a home at 29 Middlesex Street, which Allan renovated and kept immaculate, including beautiful flower and vegetable gardens, and fruit trees. He kept birds, and fish as a hobby, along with hundreds of Orchids. Allan and Phyllis had 6 children: Donna, Trevor, Selwyn, Russell, Trish, and Graeme.

The workshop he built for his construction business, is down Meredith street, on the left before the Patea Bowling Club. (He also played bowls for many years too.) When Allan retired in 1975, he sold the workshop to the Local Undertaker, Bryce Millar. Bryce converted it to his Mortuary. After Bryce retired from his business, the building then became a flat....house that it still is today.

In 1962 he was elected Mayor and in the next 6 years major road works were carried out in the Borough. A new water reservoir was constructed for the town, after fears were expressed about the safety of the 50 year old water tower behind the town hall. The Water town was demolished on 5 April 1964. A major beautification programme was also stared during his term as Mayor. The Pohutukawa trees which line the main road at the north end of town were planted during this time.

In 1969 he became a J.P. and was a foundation member of the South Taranaki J.P. Association and its president in 1976. In 1963 he was president of the revived local St John’s Ambulance Association and was its Patron and was President of the Men’s Bowling Club prior to 1962. He was on the committee of the Patea Aero Club and a member of the advisory board of Patea Plunket. He was involved with the formation of the Old Folks’ Association and in conjunction with Doug Ansley worked hard to get the Association rooms built and opened in 1968, and was Patron of that organisation.  He also took an interest in younger members of the community, serving four terms on the School Committee of Patea Primary School.

A hobby interest of orchid growing led to his being on the first executive of the South Taranaki Orchid Society since its founding. However, one of his greatest in interests was the  Patea  Kilwinning Lodge to which he belonged for 33 years, and was Master of the Lodge in 1966 and was secretary for many years. In an interview in The Patea Mail in November 1994 Allan gave his views on the current structure of the District Council: "back in the 60's the Councillor's and Mayor gave their time for gratis. It was only in later years that Councillor's received a very nominal sum, and this was donated back to worthy local causes. Allan also feels that in the old days, the Mayor, chairmen of finance and works committees were more personally involved and were readily approachable by any member of staff. It was a community effort he said, Councillors would speak with work staff, foreman and employees, listen to their suggestions and discuss them at the next committee meeting, With the structure of the Council today, and with it being based in another town it has closed a ready access. There are too many Chiefs and not enough Indians he said".
​
When he became ill, they moved to a smaller house at 6a Lincoln Street. Allan died on 21 December 1998, and is buried at the Aramoho Cemetery, near his parents. Phyllis lived on for another 18 years, dying on 23 May 2016 and was laid to rest beside him.