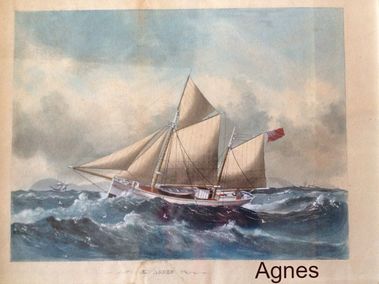 Mr John Milroy: (b 1839- d 1895)
The 2nd Mayor of Patea, Mr John Milroy was one of our very early and energetic settlers; he arrived in Patea when it was called Carlyle & the new township was starting to be built along Egmont St. John  was born at Ballantrae, Ayrshire, Scotland to John and Ellen (nee Beggs) Milroy. He was the youngest of four girls and three boys. In 1857 his brother Thomas was drowned in Bolivia while trying to cross a river.
John joined his remaining brother in the building trade until his brother was accidentally killed at work. This was probably the catalyst that made up John's mind to seek fresh beginnings. So at the age of 23 on 24 December 1862, he embarked, on board the sailing ship ‘Silistria’, from Glasgow bound for New Zealand. He arrived at Port Chalmers in April 1863. Within the first year of his working in the Marlborough region, he received news from Scotland that three of his sisters had died in a Typhoid epidemic. So he persuaded his remaining sister, Mary, to join him in New Zealand. She kept house for him for several years until her marriage.

Upon his arrival in 1869 he opened Carlyle Timber Yard, a lucrative line of business in this district that was desperate for new dwellings, shops & civic buildings. It was at this time that he purchased the ketch "Agnes" so as to have a more secure control over his timber shipments from the Marlborough Sounds, & he later had shares in a ship called ‘Falcon’ John had built ‘Milroy Wharf’ on the right side of the river bank off York Street, for his ship to unload its cargo. The Harbour Board bought this in 1878 & changed its name to Carlyle Wharf (later known at Town Wharf) He was elected as a founding member of the Carlyle Town Board on 23 August 1875, he later became its Chairman. He was also a strong advocate for education in the area, and was on the committee for the Carlyle School on 1873, and was one of the 5 members for the new Patea Education Board in 1874.

In 1877 his interests in the river & shipping was recognized when he was one of 4 government nominees elected for the Patea Harbour Board. With his business & the town prospering, John Milroy built the Central Hotel on Egmont St. This stately two story building took almost a year to build. There is an article about its opening in the Hawera Normanby Star on 2 Oct 1880. Mr Owen McKettrick was the first publican, leasing the premises from John.  On the 15 March 1881, at the age of 42, John married Louisa Sparks at her parents home on Meredith Street in Patea. John and Louisa later gifted this piece of land to form the Patea Bowling Club. John also built  the first 'Waimate Hotel' in Manaia, opening it in October 1881. It burnt to the ground 22 yers later in 1903, was rebuilt, then burnt to the ground again in 2016.
When the Patea Borough Council was officially gazetted on 13 October 1881, John was again elected as one of the ten councillors. George Sherwood was the first Mayor of Patea, but in less than a year John Milroy had been voted in as the second Mayor of Patea. John also successfully stood against Sherwood for the position of Harbour Board chairman.. In 1882 his first child, a daughter, Beatrice Olive was born.
A second daughter Ella May was born in l883, but she lived for only seven months.

About this time John Milroy travelled to Dunedin to sell his ketch and schooner. Upon his return in August 1883 just before the Railway was opened up from Waverley to Manutahi,  he resigned from his positions in Patea, and the family moved in 1884 to Manaia. Mr RA Adams was elected as the 3rd Mayor for Patea upon John’s resignation. The Milroy’s lived in the Waimate Hotel until a new home was built in Manaia, at 42 Kauae St, at the intersection of Tauhuri St.

Another daughter Ada Louisa was born in 1885, she was born profoundly deaf. John continued to be involved with community affairs. He became one of the organisers and founders of the Presbyterian Church, in Manaia and was also elected to the Manaia Council. A fourth daughter, Vida Alice was born in 1890. Vida had a successful career in Nursing, & was awarded an MBE for her services to Nursing in the 1953 New Year Honours list and presented with it by the Queen in the Town Hall Wellington during the Royal visit. None of John’s daughters married, but Vida bought up her half brother's daughter, Barbara Watkin’s nee Smillie, when the mother died.

John Milroy was voted chairman of the Manaia Council in 1891 - a position he held until his sudden death in 1895 at the age of 56. The funeral cortege for John, was a very large one with people joining in along the journey to the Patea Cemetery where he was buried alongside his daughter Ella at the end of the main driveway.

On 30 May 1898 when the Manaia Flour Mill is burnt to the ground, the Hawera Normanby Star reports that it was owned by Mrs John Milroy, she was an enterprising woman herself. She then invested her money in a farm on Egmont Rd in New Plymouth & called it Hillsborough after the Mr Hill she bought it from. Hillsborough is now an urban area of the city.  John’s widow Louisa married again to Mr Thomas Smillie & had 3 sons. Louisa, Thomas & all their children are buried at Te Henui Cemetery New Plymouth. John is buried in Patea Cemetery with his infant daughter Ella May.