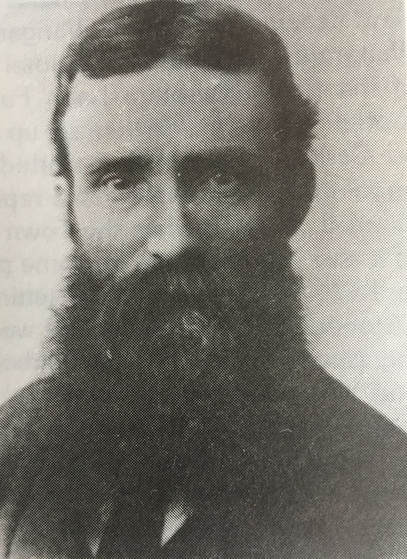 Mr Charles Finnerty: (b 1842- d 1899)
Mr Charles Finnerty succeeded John Gibson in the mayoralty in December, 1889, and served one annual term of office. This one year being his only participation on the council. He had been temporary Town Clerk from January, 1887, in the absence of  Mr Eyton, the first Town Clerk of the Patea Borough Council, but asked to be relieved of the position in September and appears to have been away on surveying duties for periods at least of 1888.

Captain Charles Finnerty had been in the Indian Campaign during the Indian mutiny of 1857 and was an officer on the staff of General Gordon in the Chinese Campaign. Later he came to New Zealand and joined the Armed Constabulary. Apart from his military activities he was by trade a surveyor and amongst later local jobs he traced the pegs and grades on the Heads Road. Possibly it was his surveying activities which brought him to Patea district. He was born in Malta, son of Charles and Elizabeth Finnerty.

He appears to have been living in Waverley when in 1877 at the age of 36 he married Clara Elizabeth Gill Allsworth, then 25, daughter of Rev. Ralph Allsworth the Presbyterian minister of Waverley.    In 1886 he became Chairman of the Patea Harbour Board and held this position to 1896. From 1887 he was secretary for the Patea Agricultural and Pastoral Association.   For the next few years he was involved in a big surveying contract in the “Eastern District” (east of Stratford) near Strathmore and the Kahouri Stream where he was for a while camped.

Capt. Finnerty strongly recommended the establishment of a township on the clearing where Whangamomona was finally established and his original plan was finally adopted in 1898 and the township sections were sold.   Patea businessmen R. A. Adams, W. Cowern, and G. Williams all bought sections there. Finnerty was surveying and possibly living in the area from about 1893 or four and at some time the whole family moved there. Mrs C. E. G. Finnerty is listed as one of the property owners in the district of Huiakama Improved Farm Settlement Blocks when they were opened up in 1893.   In this year Capt. Finnerty had aspirations to Parliament, but forewent his opportunity by retiring from contest for the Liberal seat in favour of William Cowern.

Charles and Clara had six children; Charles Richard, Ann Elizabeth, Lilla, Arthur John, Edwin Gill, & Alice Emily,  who were born and brought up in Patea. His eldest son Charles Richard Finnerty joined his father for much of the surveying work from 1894 and settled in the Whangamomona district later becoming a member of the Whangamomona County Council and later Stratford Borough Council. A daughter Lilla began work as a pupil teacher at Huiakama school in 1901 and remained in the area till her death. There were two other daughters, and one of their son's died in Canada.

Charles met with an early death at the age of 57 after becoming ill while out on survey and he was brought back to Patea where he died, in 1899. Clara lived on in Huiakama and died at Stratford in 1928.   A family tombstone in  Patea cemetery records that the headstone was “erected by friends in recognition of his stirling worth and public and social usefulness.”