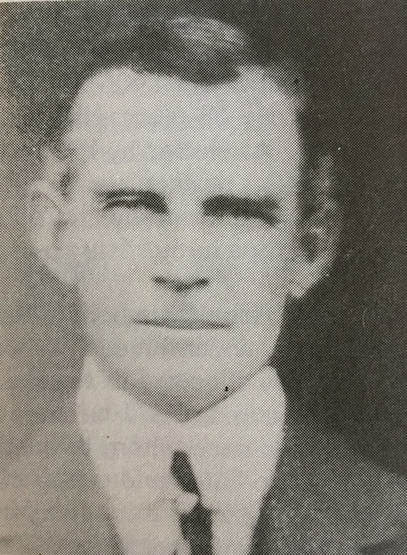 Mr John Joseph Holtham: (b 1870 - d 1923)
Mr Holtham came on to the Council as a result of the by-election caused by H. O. Clarke’s resignation and G. Williams assuming the mayoralty in December, 1905. He was a Councillor for three years and then did not return to the council again till 1919.
It was in the May of 1920 that he was elected Mayor with 315 votes to McKenna’s 257 and proceeded to the next term unopposed, in 1923. However he died on the last day of the year 31 December 1923 at the age of 53, the only mayor to die in office.
J. J. Holtham was the only mayor to be born and bred in Patea. His father Mr Edwin Holtham was a builder who first came to Patea with the militia in 1868 and shortly after his wife Jane and son joined him here and they settled at The Heads where John (always called Jack) their second son was born. Later Jack’s father built a house on Cambridge Street where the family resided for years. There were six other children: Christine, Jessie, Minnie, Harry, Ernest and Arthur.
After Edwin Holtham‘s death Jack's mother Jane worked as local maternity nurse for 45 years and was thus widely known in the whole district. She was a widow for 49 years when she died at the age of 90 in 1932.
Jack did not follow his father's trade, but took up tailoring, beginning his own business in 1893. Three years later he  moved to Wanganui at the time of his marriage to Emma Atkins and they resided there for six years before returning to Patea.
In 1904 Jack set up a new Patea business, almost opposite R. A. Adams shop, which he continued to run until his death of aa aneurysm on New Years eve 1923, when it was taken over by Mr J. Dempsey.
In addition to his council activities he was on the Patea School Committee and the Chamber of Commerce from 1905.   He joined Freemasons in 1904 and was Master of Kilwinning Lodge 1910-11.
Patea was proud of its “home grown" mayor and he was considered a fighter in the cause of “good and right”. John and Emma are buried at the Patea Cemetery.