Mr George Francis Sherwood: (b?- d 1895)
George Francis Sherwood appears to have been a great innovator, making many changes in direction throughout his life. As far as his time in Patea, which spanned only about 14 years, he was “first” at the helm of each important civic position.  Opinions differed however as to his capacity or his personality in being successful and comments varied from “He will be remembered as a clever enterprising man who did a great deal for the town” “The noble chairman spends the whole of his time in the service of Patea people. . ." and  “Indeed it is said to his credit that Patea has become the one successful harbour on the West Coast of this island” to — “The present mayor gained his position owing to the promise he made — I am not afraid the public will be led away again to believe all he tells them” and “It is well known he does not work with the majority of councillors.  The editor of the Patea Mail summed the situation up in December 1882 at the time of Sherwood’s defeat over the second mayoral term by saying “Mr Sherwood has his fault but has honestly striven for advancement of the district to the sad neglect of his own interests.”

Bearing in mind the verbose, “colourful” and forthright articles and letters appearing in the newspapers of the time it does appear he was a person of some controversy and perhaps victim of local factions of the time. Nevertheless a man of drive and initiative like many others attracted to New Zealand in the ’60s he doubtless made his mark and maybe pointed Patea towards its successful future before bowing out and trying his fortune elsewhere.  After serving as a midshipman in the British Royal Navy, Sherwood was attracted to Australia's goldfields in the 1860s. He then came to New Zealand settling in Whanganui and by 1867 had moved north to Waitotara where he ran the hotel by the ferry until 1870. He started on his public activities as secretary  of  the  Patea-Waitotara  Loan Fund  following the cessation of the Land Wars in 1869.   About this time he moved on to settle in newly established Carlyle town with his wife Harriet and children, where he set up as a watch maker.

When the Town Board was inaugurated in August, 1875, Sherwood was elected to it and for some period of its six years was chairman. He had already been chosen as the third Patea representative on the Taranaki Provincial Council in 1874. The Counties Act in 1876 brought about the setting up of the Patea County Council in October '76 and Sherwood was elected chairman at its first meet-ing. At the beginning the county area extended as far north as the Taungatara River near Opunake and included present Hawera, Eltham, Waimate West and part of Stratford in its area.   Also in 1876 the Patea Harbour Board Act was passed in November and together with C. A. Wray, W. Williams, and J. Milroy, Sherwood was nominated to the Board and was the chairman from its inauguration until 1881.  Thus Mr Sherwood for a period was at the seat of power of the three most influential bodies set up to control the area. In 1879 he stood for Parliament against Major Atkinson in the Egmont electorate. Atkinson had a clear win with 322 votes to Sherwood’s 118 over-all, but in Patea itself both polled 64.

When in November 1881 Carlyle Town was elevated to become the Patea Borough (on the initiative of Mr Sherwood) once again he stepped into the top position being elected mayor by 63 votes to Mr W. Dale Jnr’s 52, on November 15th. In 1881 he also became an original member of the Patea Domain Board which was gazetted at this time. The 9 Councillors on the first Patea Borough Council were: Samuel Taplin, John Milroy, Patrick Mahony, Robert Albert Adams, William Aitchinson, William Dixon, Patrick Mahony, John Gibson, William Howitt, Alexander Black. These 6 other well known men also stood for election but didn't have the votes: Frederick Searling, John Herbert, Daniel James Williams, James Lett, Charles Frederick Barker, Daniel Smith.

During his term of office as Chairman of the Harbour Board at the second meeting they adopted the Report by John Carruthers, Engineer-in-Chief, and decided on the Eastern Break-water, selling 3,000 acres of endowment land to raise finances and on 14th June, 1878  he  laid the foundation stone of the Patea breakwater. In 1881 he turned the first sod of the railway line at Patea.  This part between Waverley and Manutahi was the final link in the route connecting Wellington and New Plymouth via Patea and ironically may have been the first link in the chain of events which later limited Patea’s development and by-passed it in favour of Hawera.

Annual elections took place and in November, 1882, Mr Sherwood polled 64 votes to Mr Milroy’s 71 for the mayoralty. Sherwood stepped down graciously and retired from local bodies at this stage.   James Lett writing to the Patea Mail at this time pointed out that by then Mr Sherwood had been replaced by John Milroy as Chairman of the Town Board and Mayor, by William Dale Jnr, as Chairman of County Council (in 1879-81) and by D. Coutts as Chairman of Harbour Board and Lett considered all three were in league against Sherwood.   After all this, Sherwood tried a new venture in 1883 utilising Patea’s local supplies of suitable clay and starting a Pipe and Tile Factory beside the Patea River at the end of Scotland St. The area is still known as 'the Potteries'. The Patea Borough Council accepted his tender and placed an order with him in March ’83 for glazed drainpipes but not without some misgivings as they had an escape clause in the event of pipes not being delivered according to time and specifications. Unfortunately their doubts were justified and his new venture failed.  Shortly after this he decided to try fresh fields and went off to U.S.A and Mexico returning briefly in 1884 for a few months.

Although he indicated he had some good speculation in hand he was reticent as to its nature. His family consisted of several children; Arthur, Francis George, & Florence Elizabeth are known names at this time.  Son; Frank Sherwood lived in Patea  and was on the Borough Council from 1897 for several years and again in 1926, he also farmed at Alton for a period. Frank was married to Maria Smith, they lived at 2 Suffolk St for a time, when Frank was Wharfinger, incharge of the 'Town Wharf' at the end of York Street. their home at 2 Suffolk St has a large concrete tower which originally had a wooden structure on top that the Wharfinger stood on to see what boats were coming over the Bar.  Maria was the daughter of Daniel Smith (Patea Brickmaker), her sister was married to R A Adams, 3rd Mayor of Patea.

His daughter, Florence accompanied him on his travels when he left Patea and later together they lived in Samoa for some time where according to one romantic account “his beautiful daughter was made queen by the natives".   He became so popular that the ruling chief presented him with Apia Harbour and a large tract of land surrounding it. His right to the gift was contested by the British authorities who controlled Samoa in those days and Mr Sherwood died in England while trying to establish his claim before the Privy Council”. This was in 1895 when he was at the time residing in Kensington, London.

This charming account was prepared for a radio programme in an article prepared by the Patea Jubilee Executive in 1931 and leaves one wondering to what heights George Francis Sherwood might have aspired had he been more fortunate. His wife Harriet died on 16 January 1904 at the age of 66, she is buried at the Patea Cemetery beside her daughter inlaw Maria Sherwood. 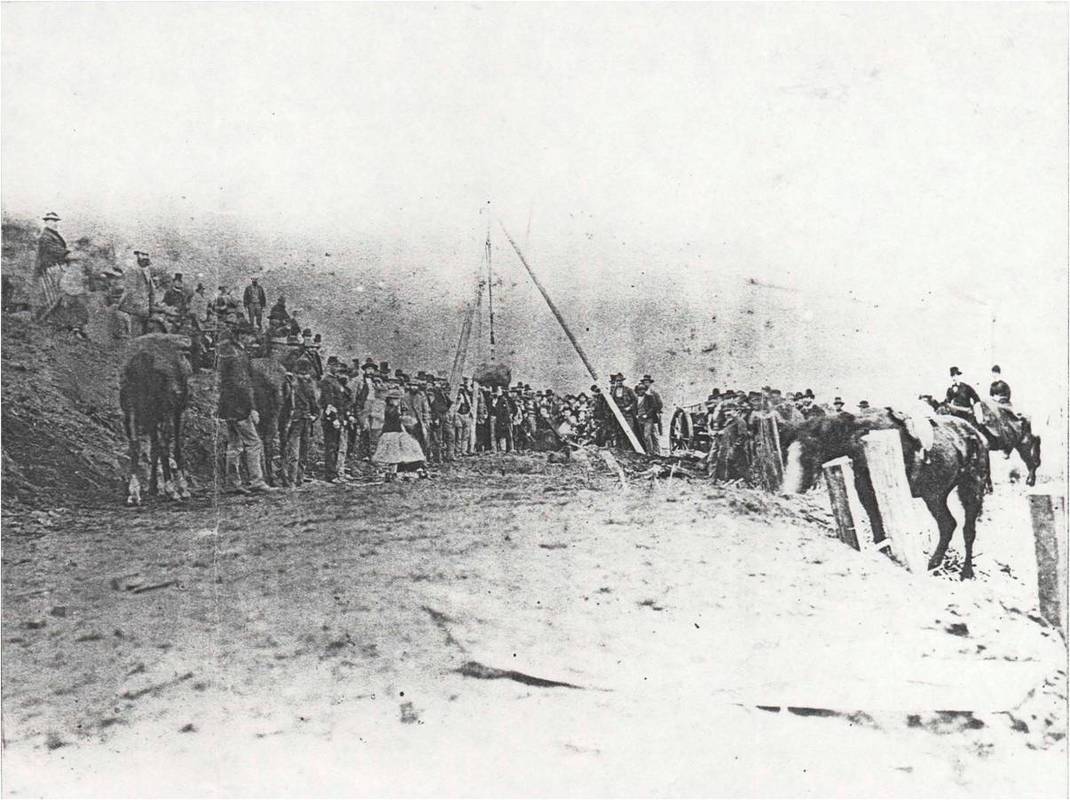