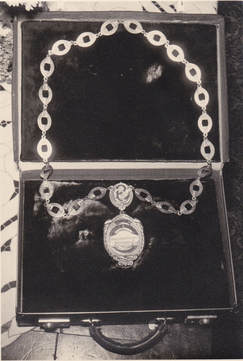 Mr Guy William Thomas Corbett: (b 1906 - d 1969)
Mr  Guy  Corbett came on to the Borough Council in 1947, replacing Mr Daniel Quickenden who died in office in February. Corbett was re-elected at the November elections and in 1950 became Mr Langslow‘s deputy mayor, and took over as mayor in November, 1953, serving for 3 terms till 1962 when he retired from the council altogether. Mr and Mrs Corbett came into office just before the 1954 visit of the Queen and nearly their first civic function was to welcome the Queen to Patea. Also during his mayoralty a new mayoral chain was presented (donated by the Ramsbottom family at a ceremony in April, 1956, and in October, that year, the 75th Anniversary celebrations took place.

Mr Corbett was born in Eltham in 1905 and went to school at Eltham, Rowan, Kakaramea and in 1918 Patea District High School when the family moved here as his father came to a job at Gibson‘s. In 1920 Guy left school and went to work with Charles Pulley on the last stages of the pier construction at Patea. Then in 1921 he joined the West Coast Refrigerating Co., as an office boy and worked his way up over the years to become managing secretary in 1933. This also involved him as managing secretary of the South Taranaki Shipping Co., until it was wound up in 1959.

Guy Corbett married Freda Boagey in 1930. Freda was a grand-daughter of the former mayor R.A. Adams. She was a talented musician and played a great part in musical activities, teaching violin, dancing and arranging concerts together with Mrs Jean Fleet and Mrs Gertrude Carey.  They had a lovely Art Deco home at 35 Chester Street. Mr and Mrs Corbett had one son who has become a patents attorney in Melbourne. On a plane to Melbourne to visit her son, Mrs Corbett was seated next to a lady from England. This lady spent some time saying how sorry she felt for the people in the colonies. In England she could go to London and watch the dear Queen at the Palace on special occasions. After this Mrs Corbett said “I didn’t have the heart to tell her that the Queen came to Patea, and we sat together for about twenty minutes.”

Guy became Mayor in 1953, in 1954 the West Coast Refrigerating Co. merged with the Taranaki Producers‘ Freezing Works Co. in New Plymouth. While awaiting the building of the cool store the Patea office was kept on and Mr Corbett continued here. In 1958 the new Patea Town Baths were opened on Stafford Street, many fun filled days were spent here for over 40 years, until December 2012, when the new Patea Pool was opened on Surrey Street.

With the final removal to New Plymouth of the combined Cool Store business, Corbett became secretary to the Whenuakura Dairy Co. in 1962, the same year his 3 terms as Mayor came to an end. In 1965 he was asked to go to New Plymouth as secretary of the whole Taranaki Producers’ Freezing Works Co. which position he held till his death in 1969.

He and his wife were given a great send-off from Patea with a public presentation in recognition of their work in the town.  Other activities in which Guy was interested were Patea Kilwinning Lodge which he joined in 1953 and became Master of the Lodge for 1962-3, the Secretaries‘ Association of which he was a member and Patea Seaside Improvement Society and in his early days he was local secretary for the National Party. He was a golf, billiards and football player and also Vicar’s Warden at St George’s Church. Guy Corbett was 63 years old when he died in 1969.